Harald Neubauer (born 3 December 1951 in Hamburg) is a German politician and journalist from the far-right scene. He was a Member of the European Parliament from 1989 to 1994. In 1992 he became co-editor of the far-right monthly Nation Europa.

Neubauer was trained as a merchant and completed his military service in the German army (Bundeswehr). He was a member of the neo-Nazi National Democratic Party of Germany (NPD) from 1969 to 1972 and again from 1975 to 1981, while also becoming associated with Gerhard Frey and his German People's Union (Deutsche Volksunion, DVU). Although founded in 1971, the DVU did not officially register as a party until 1987. Neubauer was editing Frey's newspaper Deutscher Anzeiger (1975–1983).1

According to Germany's most eminent neo-Nazi in the 1970s and 1980s, Michael Kuehnen, Neubauer used to be a functionary of the NSDAP/AO of Gary Lauck from the early 1970s until the mid-1970s in Northern Germany, and was a treasurer of Gauck in Schleswig-Holstein.2 Kühnen said furthermore that he had provided security services for a DVU rally in 1977 co-organized by Neubauer, which featured the Nazi flying ace Hans-Ulrich Rudel, a key figure in the reformation of the former Nazi networks worldwide after the war.3 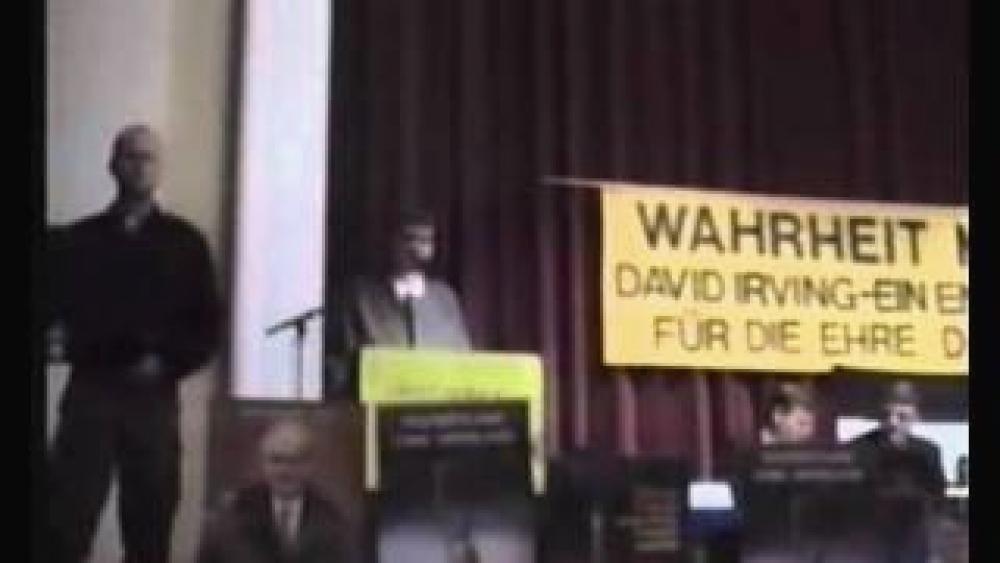 Documentary by Michael Schmidt about neo-Nazis and holocaust deniers published in 1991 after two years of extensive research.

In 1983 Neubauer joined the party Die Republikaner (REP), and the following year became press advisor of party founder Franz Schönhuber. He backed Schönhuber in his subsequent power struggle with Franz Handlos, and thus, when Schönhuber became Chairman in 1985, he appointed Neubauer as secretary.4 He soon added the roles of regional chairman in Bavaria, federal vice-chairman and Member of the European Parliament to his accolades and was widely seen as the eventual successor to Schönhuber.4

The two became estranged however as Neubauer followed a more extremist path and for a while in 1990 he even forced the temporary resignation of his former mentor.5 Ultimately Schönhuber triumphed in the struggle, forcing Neubauer out of the party and replacing him with Rolf Schlierer as vice-chairman.5

Neubauer and many of his followers were purged from the Die Republikaner and in January 1991 they regrouped under the "German Alliance - United Right" (Deutsche Allianz-Vereinigte Rechte), which was renamed German League for People and Homeland (Deutsche Liga für Volk und Heimat, DLVH) later that year. The new group had the declared aim of uniting the many factions on the far right under a single banner, and initially had some success, attracting three other Republikaner MEPs (Johanna Grund, Klaus-Peter Köhler and Hans-Günter Schodruch)6 and the support of the influential Nation und Europa journal.7

Within the DLVH Neubauer was part of a three-man leadership team with Rudolf Kendzia and Jürgen Schützinger. Former NPD chiefs Martin Mussgnug and Franz Glasauer were also given leading roles, yet the new group made little impression in the state elections of 1992.8

In 1992 Neubauer became co-editor of Nation und Europa and is a member of the board of the "Society for Free Journalism" (Gesellschaft für Freie Publizistik), probably the most influential writers organization and publisher of the far right in Germany.

With the DLVH becoming defunct already in 1996, Neubauer ran on the NPD list in the 2005 German federal election in Saxony.

Harald Neubauer in the Ratskeller Berlin.

Selected pages from the Jewish Chronicle (1951)