Gunnar Lindemann is an AfD politician from the Berlin district of Marzahn sitting in the Berlin City Parliament. He can be frequently spotted in Russia and the "Novorossiya" states (Donetsk, Luhansk, South Ossetia etc.).

Lindemann is a trained banker and security officer1 and worked as a personnel operations planner for a private railway company. In September 2016, he won the election for the Berlin House of Representatives with 30.6% in the Berlin district of Marzahn-Hellersdorf as a direct candidate of the AfD.23

"Lindemann, an AfD politician and deputy for Berlin Marzahn in the Berlin City Parliament, represents a district with a large Russian-German community where the AfD could score a record victory. Whereas the Russian public saw Lindemann as a German politician on a diplomatic mission, he has attracted negative attention in the German media for publicly appearing with proponents of the right-wing extremist milieu, among them neo-Nazis and NPD functionaries. Furthermore, there have been reports of Lindemann making xenophobic comments on social media and being a member of groups in which nationalist and anti- Semitic content is rampant."4

Amongst the German delegation were, next to Lindemann, Eugen Schmidt and Nic Vogel. Yuri Gempel's NGO, German National-Cultural Autonomy of the Crimean Republic (GNCAC), reportedly extended the official invitation to the AfD delegation.6

From 19-21 April 2018, the 4th Yalta International Economic Forum (YIEF) took place. The organizing committee of the forum had announced a large delegation from Germany and Austria with "more than 50 politicians, business representatives, civil society actors and experts."7 Amongst them Gunnar Lindemann, and several other important figures amongst the Russian-German AfD liaisons. 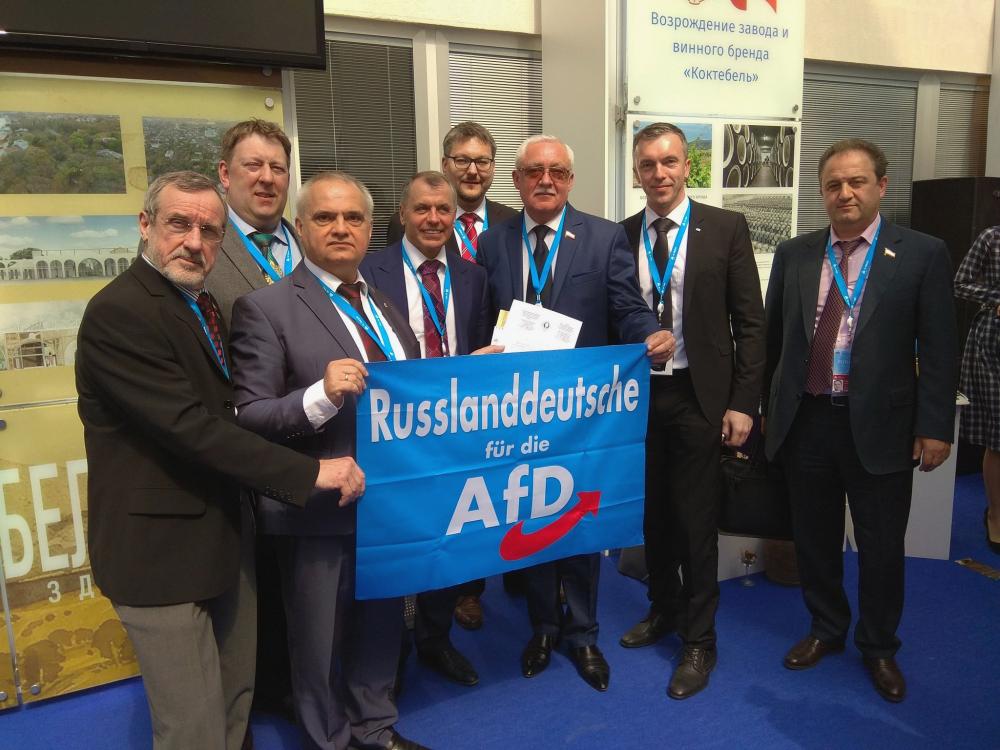 The image is subtitled: "During a meeting with the President of the Crimean Parliament, Konstantinov, ideas and concrete steps to improve economic cooperation between Germany and Crimea were exchanged."

The AfD delegation had a separate meeting with Vladimir Konstantinov, chairman of the State Council of Crimea, where “concrete steps to improve economic cooperation between Germany and Crimea were exchanged.”8

In the framework of the 4th anniversary of the Donetsk Republic, Gunnar Lindeman, Andreas Maurer (Linke), Tobias Nase (Anti-Imperialist Action) and Manuel Ochsenreiter (Katehon, GCES, Zuerst!) were invited to the celebration in May 2018.9

According to Lindemann’s Facebook post from 14 May, 2018, he met with "Russian Germans" of the Donetsk Republic, and proposed the foundation of a national-cultural public organization, as well as to organise an Oktoberfest in the fall. The Minister of Foreign Affairs of the People’s Republic Natalia Nikonorova has promised to consider the project. Pravda has published an interview with Lindemann about his visit.10 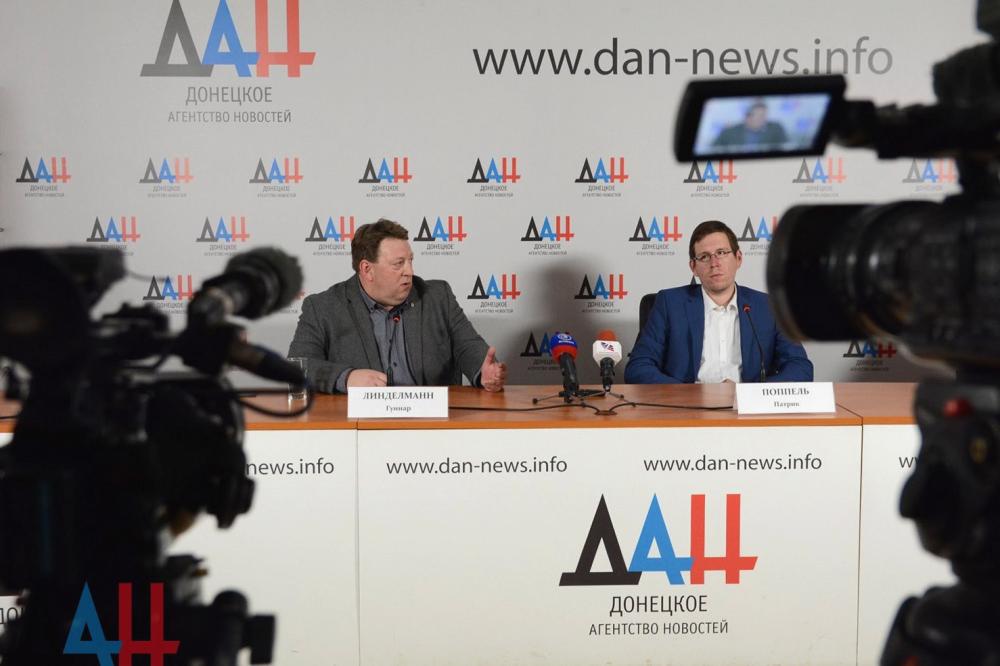 In February 2019, Lindemann was visiting Donetsk, an event positively covered by local news, and also by an English-language website called Stalker Zone,11 a media outlet connected to Ollie Richardson, who seems to be involved in the Yellow Vests movement.12 The Stalker Zone article emphasizes the condemnation of then-President of Ukraine, Petro Poroshenko, by Lindemann:

The “Alternative for Germany” politician Gunnar Lindemann, who visited the Donetsk People’s Republic during the week commencing February 25th, stated during a conference at the Donetsk News Agency on the 27th that an international tribunal should punish the President of Ukraine Petro Poroshenko for the war crimes he has committed in Donbass ... He added that the tribunal should include highly qualified lawyers from all over Europe, and documents and evidence demonstrating violations committed by the Kiev authorities against the population of Donbass should be presented at the meeting.11

In April 2019, Gunnar Lindemann took part in the annual Yalta International Economic Forum (YIEF). On a picture he posted on Facebook, he can be seen together with French far-right poster child Marion Maréchal-Le Pen.13

Gunnar Lindemann with Marion Maréchal-Le Pen at the 2019 YIEF forum.

On June 10, 2019, Gunnar Lindemann can be seen on a picture together with Kris Roman, the Finnish Russophile fascist Johan Bäckman and the Minister of Foreign Affairs of South Ossetia-Alania, Mr. Dmitry Medoev (Farnawaz Medoiti) in South Ossetia. There are pictures from that trip that show Roman with a rifle. 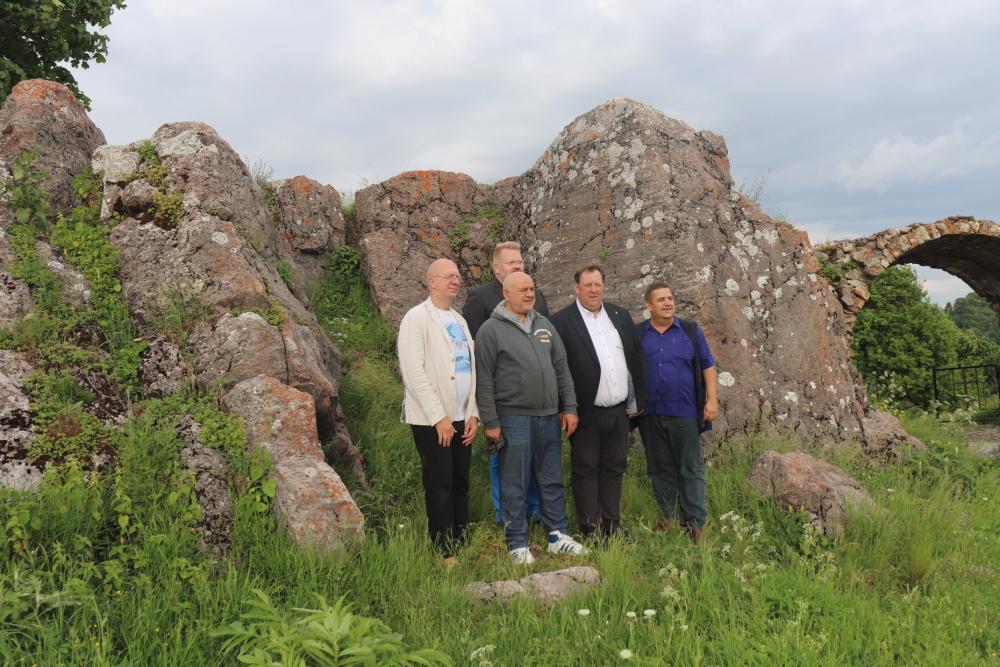 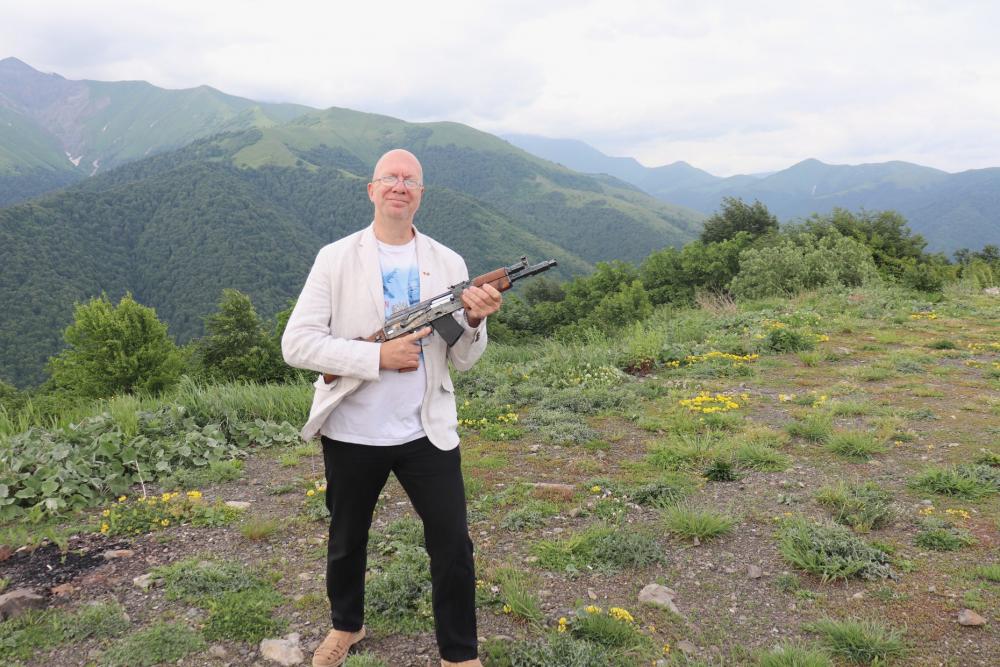 Kris Roman is "one of the most important pro-Russian far-right agitators in Europe, managing the "New-Solidarist Alternative Geopolitical Think Tank" Euro-Rus, with contacts in Iran, Syria, Belarus, Russia, Serbia and Donbas. According to an investigative report in the Belgian Apache, Roman had 'built an impressive neo-Nazi network' as early as 2009, with contacts to Russian far-right proponents such as Alexander (Potkin) Belov, leader of the now-defunct Movement against Illegal Immigration (DPNI), and a number of other DPNI members, as well as American neo-Nazi figures such as David Duke and the British Nick Griffin. His frequent interactions with both far-right and ostensibly left proponents point to a reorientation over the years from staunch neo-Nazi to political cross-front agitator," particularly since being baptized into the Orthodox faith in 2015.4

On June 12, Finnish far-right and Russophile agent provocateur Johan Bäckman posted a picture of the weapon that Kris Roman is holding in the picture. 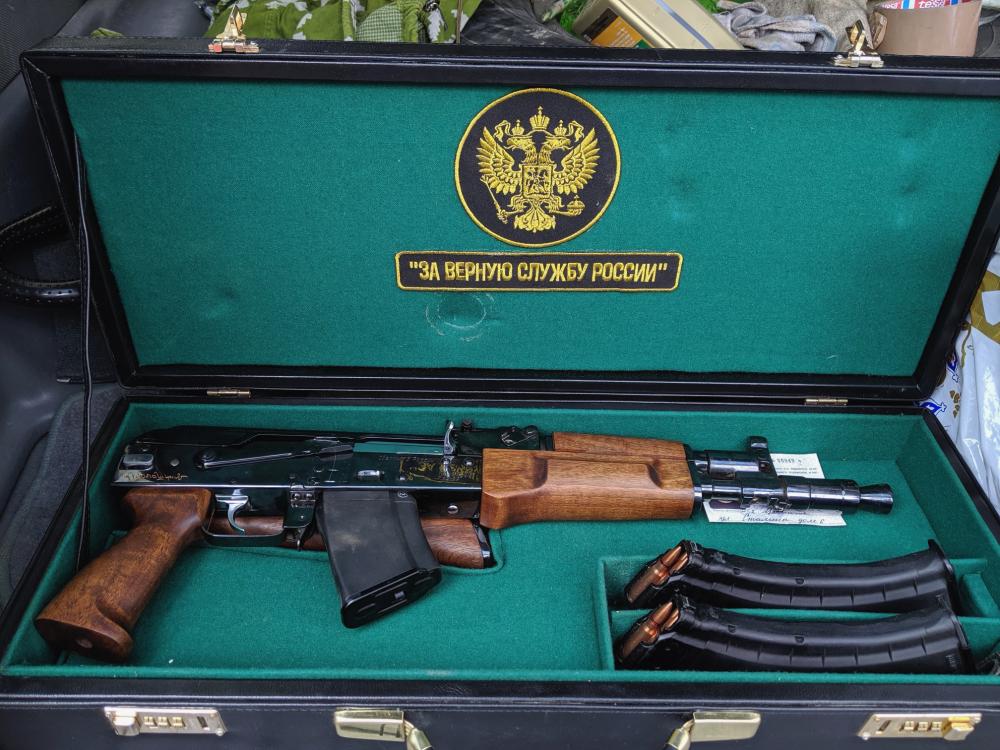 Bäckman posted another picture of Medoiti, wearing a shirt with unknown insignia.14 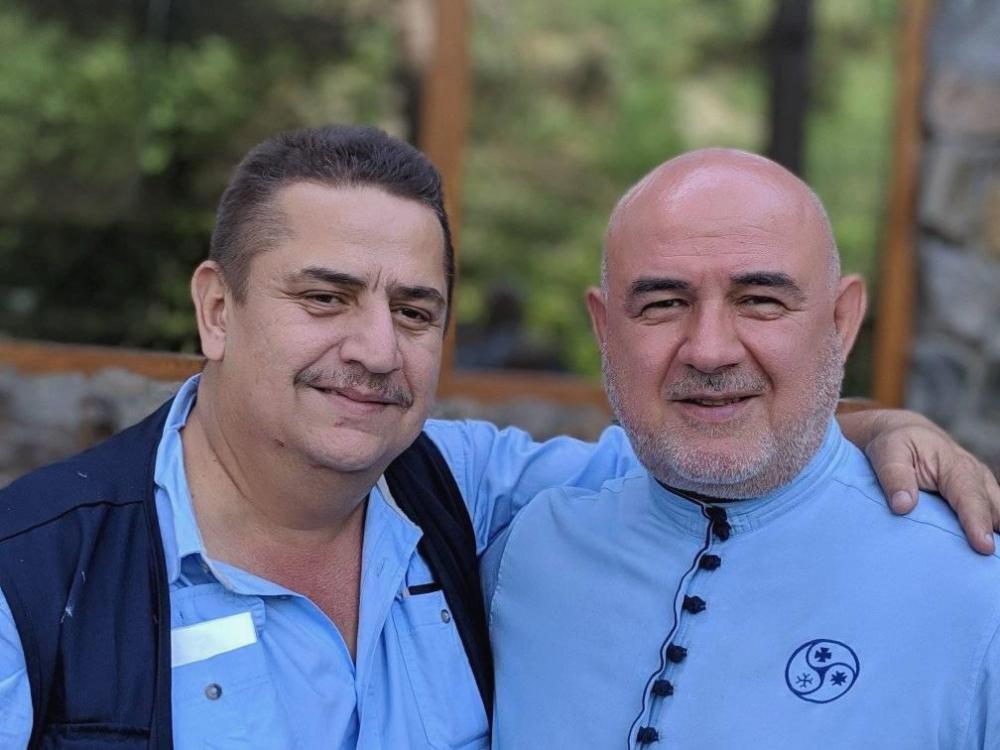 On June 12, 2019, Lindemann can be seen together with President of South Ossetia Anatoliy Bibilov, whom Lindemann calls a “longtime friend,” and Roman. Other people identified on the picture are: Stefano Bonilauri, Farnawaz Medoiti and Finnish fascist Johan Bäckman. 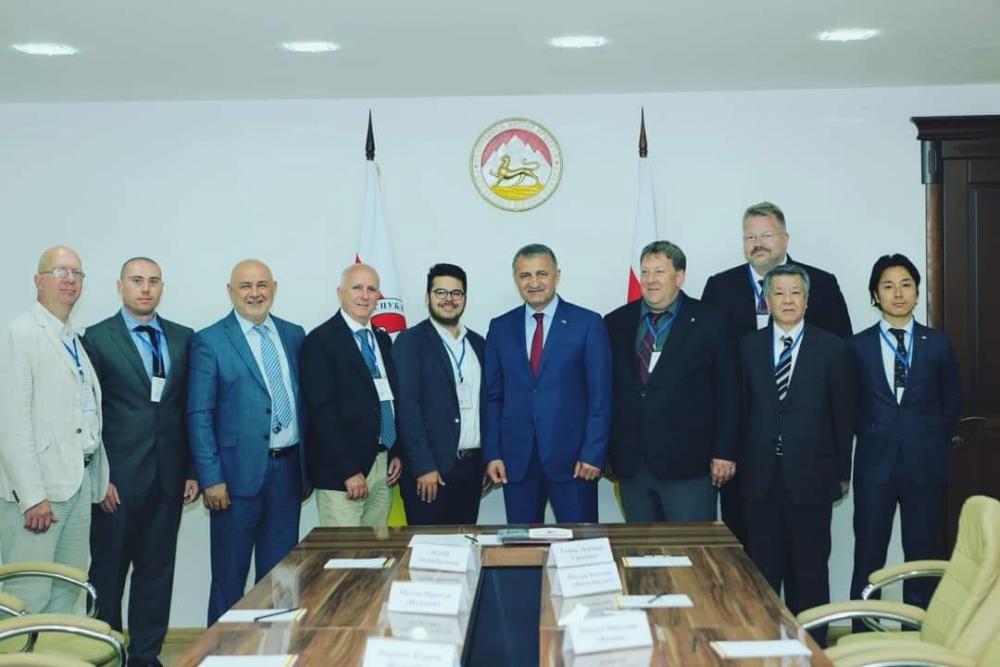 On June 19, 2019, Kris Roman posted a picture, where he can be seen together with Lindemann and the “Deputy Minister of Foreign Affairs of Lugansk.”15 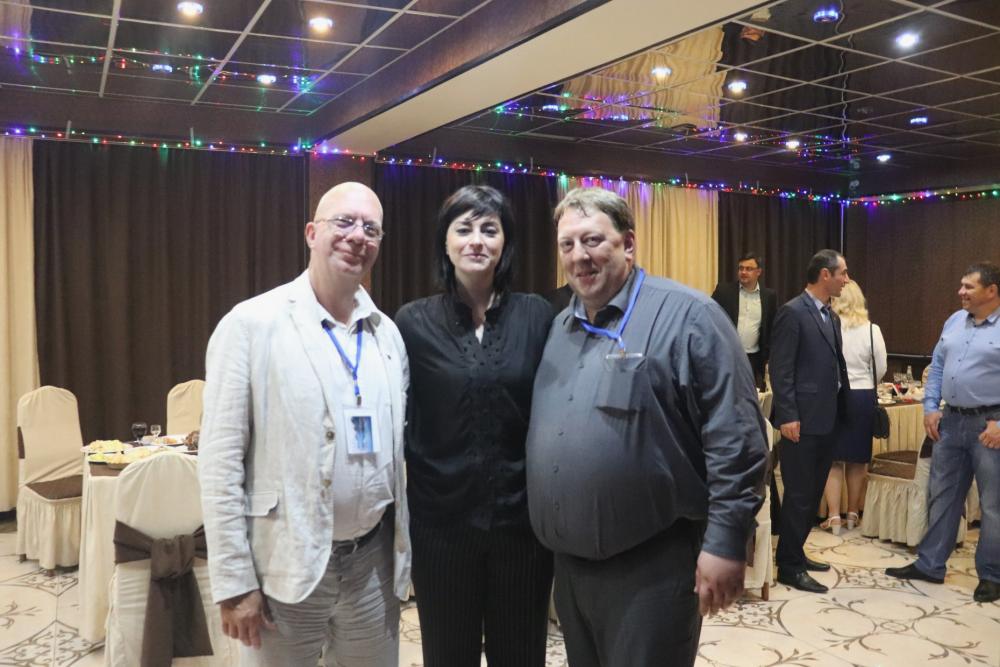 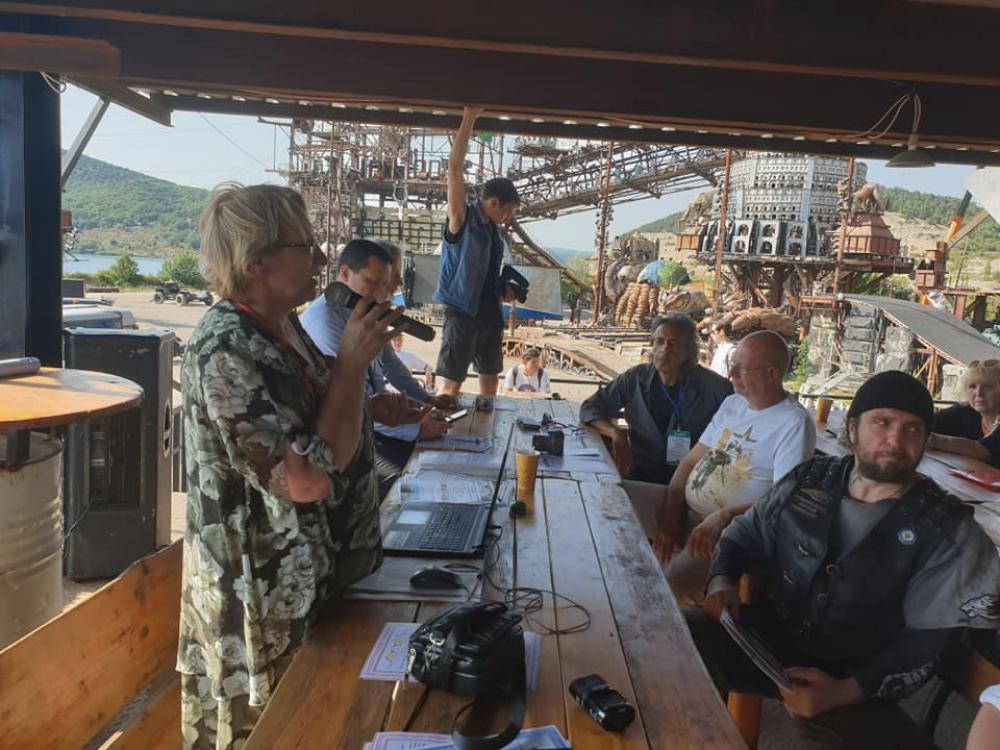 In August 2020, Lindemann took part in a mass demonstration of Corona deniers, among them hardcore neo-Nazis, Reich Citizens (Reichsbürger), Identitarians, anti-vaxxers, adherents to the Qanon conspiracy theory, and other proponents lured into the "crossfront" under an anti-scientific and conspiracist umbrella.

On September 5, 2020, the event "Live is better without Nazis" (Schöner leben ohne Nazis) took place in the Berlin district of Marzahn-Hellersdorf. AfD MP Gunnar Lindemann announced in advance that he would "observe the festival closely" and made derogatory comments about the event on social media. When he showed up at the event, he started taking photos of people who clearly dissented. Despite repeated requests from the organizers, he did not refrain from provoking them. Gunnar Lindemann was then expelled from the premises by the police.17